Ask me! I'll participate. I have over 100 friends who have no adrenal glands. Let us test the device with you.

- Signed, a Cushing's patient saved by bilateral adrenalectomy but needs a cortisol meter for better quality of life.
-------------- 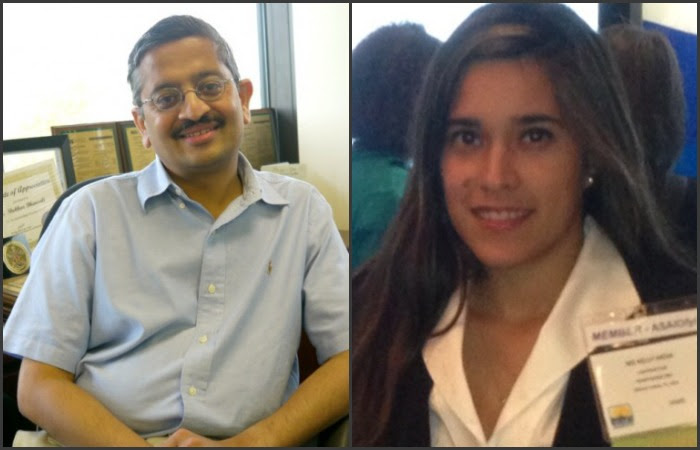 FIU researchers are developing a test to detect in real-time a person's level of cortisol – widely known as the stress hormone – which could help soldiers with post-traumatic stress disorder (PTSD), and others who suffer from cortisol's effects, to manage its impact on their health.

Cortisol is released by the adrenal glands as part of the fight-or-flight mechanism. Elevated levels of cortisol can cause a long list of negative health effects, including depression, mental illness, heart disease and lower life expectancy.

Now, with a $50,000 grant from the National Science Foundation's Innovation Corps (I-Corps) program, Shekhar Bhansali, Alcatel-Lucent professor and chair of the Department of Electrical and Computer Engineering, and Kelly Mesa, a doctoral student in his department, are exploring the commercial potential of their research on cortisol detection. Other members of the team include Gabriel Saffold, a graduate student in entrepreneurship at the University of Central Florida, and Alison Tanner from the Florida Institute for the Commercialization of Public Research, who will serve as business mentors for the project.

They are one of 24 teams from universities around the country that will participate in national business development workshops and speak with potential customers and partners to evaluate the real-world potential of their technology. They also will use the Business Model Canvas, a popular entrepreneurial tool, to refine their business model.

Cortisol levels currently can only be measured on tests done in a lab. The team's goal is to see if there can be a quantitative diagnosis for PTSD through a quick test done with a sample of sweat or saliva. The proposed sensor has the potential to aid soldiers with PTSD by providing a tool that allows them to monitor their stress levels throughout the day, Mesa said.

FIU has established itself as a leader in the detection of cortisol through its nanotechnology research. One of four partner universities in the NSF's Nanosystems Engineering Research Center for Advanced Self-Powered Systems of Integrated Sensors and Technologies (ASSIST), FIU is a leader in a national nanotechnology research effort to create small, wearable, self-powered devices that will help people monitor their health.

The FIU team's research involves building a sensor on a strip and the electronics to read it. Within the six-month duration of the NSF grant, the team will determine whether their research is worthy of pursuit.

"We need to understand what our potential customers' needs are and see if our technology can be engineered to serve them," said Bhansali, the team's principal investigator.