One in five people are identified to have a pituitary tumor when studied at autopsies. How will we know anything about the pituitary now?

And grisly?! Unless the coroner cracks the skull open on a stone like a coconut, I feel confident in saying that actually LIVING with pituitary tumors and dysfunction is really what makes life grisly.

DENVER (AP) — An update to Colorado antiquated coroner system has been signed into law. Gov. John Hickenlooper signed the update Thursday.
The law updates death-investigation protocol. Changes include a requirement that law enforcement must call coroners as soon as a body is discovered — not after a potential crime scene investigation is complete.
The coroner law also eliminates the grisly but out-of-date practice of removing pituitary glands in autopsies.
The coroner update comes two years after Colorado set new standards for when the state's mostly elected coroners must order autopsies.
___
Coroner law: http://bit.ly/16tMTrh 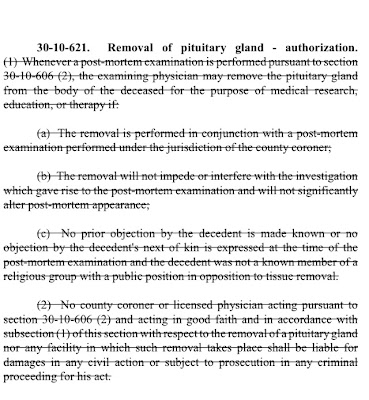