Do you have an emergency shot?

I recently took a poll among BLAers, and 15 of 80 patients were not given prescriptions for the emergency injections. Many endocrinologists refused to prescribe them and some even were chastised for their silliness in asking.

This is what you tell your endocrinologist in words an endocrinogist should understand:

For those without the emergency injection, I want you to know that those with it always have it available in the house AND take it with us wherever we go. We carry two needles, Solu cortef actovial medication, crisis letter from our doctor about treatment in the hospital, plus additional info to advise ambulance personnel or even the emergency room staff how to treat adrenal insufficiency.

Ask your nurse and doctor friends if they know where the adrenals are. Then ask them what they do. People don't know. It's sad and shocking but true. Not even the nurses and doctors in the emergency room know what to do in the event of your adrenal insufficiency or crisis. Many in this group of 95 have horror stories about ER hospital staff refusing to give Solu cortef, refusing to read/ disregarding the crisis letters from my doctors. Some refuse to take patients back quickly to check blood pressure, and instead leave them in the waiting room for hours. ER staff thinks you have the flu or a bad stomach but when you vomit uncontrollably, or they label you a drug seeker.

SOLU CORTEF 100 MG IS NOT A CONTROLLED SUBSTANCE!!

There is no reason besides ignorance and stubbornness for them to treat us like that.

The *one* safeguard we have is to save ourselves by keeping the shot with us at all times and ensuring those closest to us can administer that shot to us. Some lose consciousness (synscope) with adrenal insufficiency, while many get very confused, can't communicate, and can't manage to do the shot themselves.

I have not met 95% of you, I know. However, I would be devastated if we lost any of you.

I will tell your family to sue the doctor if you die. Not giving a pre-op Cushie and especially a BLAer an emergency shot is a malpractice suit waiting to happen. Remind the doctors of that.

Friends posted this letter from the National Association for Rare Diseases for care in emergency rooms (link) as well as a letter to doctors who refuse to prescribe the Solu-cortef medication. This can save a person's life. 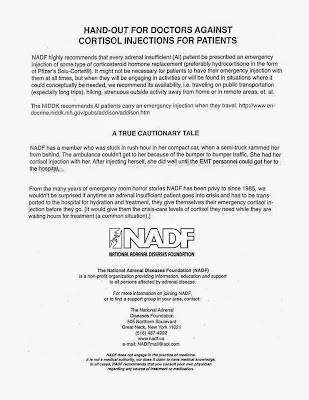